Some people grow out of their pop-punk affairs. I never did. Alkaline Trio is the only band I’ve consistently listened to since High School. I’m probably too old to be listening to it. Nobody asked for this list. There’s no reason for me to write it besides the fact that I should be doing a lot of other things right now.

9. Agony & Irony – “Calling All Skeletons” and “Help Me” are awesome, the perfect 1-2 punch to begin an album (doesn’t hurt that “Help Me” is a touching tribute to Ian Curtis, the singer of Joy Division). But the rest of the album feels over-produced without the misplaced ambition of Crimson. AK3 usually have a knack for album sequencing and are pretty good about saving the most soul-crunching songs for last. However, “Into the Night” lacks any emotional impact; kind of just manufactured, AFI-lite menace. 8. Maybe I’ll Catch Fire – This used to be my favorite AK3 album because I was 16 and felt a real connection to lyrics like “Shaking like a dog shitting razorblades.”

I was probably a weird kid. We all were. I’m happier now.

I don’t know. The album feels too ugly without a lot of the wit that usually carries the band through. 7. Remains – Their second odds and ends album has some really great songs on it—I never knew why “Hell Yes” didn’t make it on From Here to Infirmary. In fact, I like most of the songs on here, especially the three songs from the Hot Water Music split. But unlike their self-titled album, there’s no cohesion. And they probably could’ve left out the Berlin cover.

6. Good Mourning – Probably their most ‘fun’ album, and really at the top of their game lyrically (“Donner Party [All Night]”). Also, it’s their first full album with drummer Derek Grant, who’s maybe my favorite drummer to watch live. His beats aren’t very innovative, but he’s just so tight that he makes it look seamless. Matt Skiba also suffered from some sort of throat injury before and it made his voice sound haunting.

5. Crimson – There’s a lot of strange missteps on this album—string sections, pseudo-dance tracks—but I think it works for me because it seems ambitious. Like, doing-coke-off-the-soundboard ambitious: “and then we’re gonna do this and this and this…” I guess for a band that prides itself on setting limitations (they put “Trio” in their goddamn name) hearing them stretched beyond those limitations is kind of a guilty pleasure. “Sadie”, a song about Sadie Mae Glutz of the Manson family, might be my favorite song by them; after reading Helter Skelter,  I realized how researched it is.

4. Alkaline Trio (S/T) – Another odds and ends album: songs from before their first full-length. Probably the most fascinating of their albums. The songs are boozy, they’re go-for-broke, but they don’t always work (“Southern Rock” is the most boring AK3 song). They all have these weird movements (extensions) that don’t really make sense musically, but they’re intriguing. Still, pretty awesome for a band that was still finding out what it wanted to become.

3. This Addiction – An exciting return to form. They were back to using their abrasive, half-power chords, they were back to singing about drugs/booze (not that I didn’t appreciate the darkness… but come on, I’m a grown-ass man). Even their slower numbers felt like homages to what they did on Goddamnit! (can’t help but think “Dead on the Floor,” is the companion to “San Francisco”). 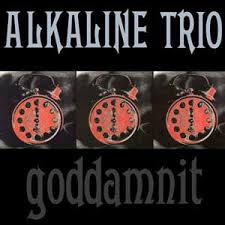 2. Goddamnit! – Their monumental debut. I feel that there are some bands that perfectly capture the time/place they come from, in this case late 90s Chicago. There were a lot of great power-punk bands coming out then (Honor System, Lawrence Arms… Smoking Popes were still around), but none had the abrasive wit and sense of humor as Alkaline Trio.

1. From Here to Infirmary – By all accounts, Goddamnit! should be everyone’s favorite, but there’s one thing that keeps me coming back to this album: Mike Felumlee. His drumming isn’t as crisp as Derek Grant’s, or as manic as original AK3 drummer Glen Porter, but it’s very inventive (try air-drumming to “Take Lots With Alcohol”). It sounds like he wasn’t prepared when they brought him in, and there’s this subtle tension of him nearly slipping up. This is the only album he plays on.

But there really isn’t a bad song on this album. I love the apocalyptic set of “Armageddon” and “I’m Dying Tomorrow.” The first time I saw Alkaline Trio play, they finished their encore with “Armageddon” and Matt Skiba blew a large string a snot out of his nose so that it hung down the entire length of his face. He kept it there while he sang. It was pretty punk.

2 thoughts on “Alkaline Trio albums, from least best to best”