Tweet: i’ve recently developed the ability to shoot air out of my eye-socket when I plug my nose and breath i think it’s serious but also fun

This is true. I sneezed one morning and it tickled my eye. Then I looked at myself in the mirror, held my nose and blew air out. Saw little bubbles forming in my bottom eyelid. Feeling was not unpleasant—just unlike anything I’ve ever felt before, which was cause for a little concern, I guess. Then I looked up those lizards that shoot blood out of their eyes in self-defense. What a wonderful ability. Got a reply from @brianallencarr: “you’re a cigar away from blowing smoke out your eyes.” Don’t know if ashy smoke from a cigar going through my eye-socket is the most healthy thing, but your eyes only yolo once. Rec’d no favs or RTs.

Tweet: wonder if at its height, bookstore employees would comment to each other: somebody’s got a case of the Tuesdays with Morrie

I was made to read Tuesdays With Morrie in 10th grade English. I think at the time to read it, my mom also had a copy, and I was disappointed that we had to read a “mom book,” but I remember enjoying it. However, the next book we read in that class was I Am the Cheese, which, I’m pretty sure, was my first experience with a first-person, present narrative. I had never heard of it, and thought the title was stupid, but it ended up having a huge impact on me. @spinning_yarn  fav’d it, so that was sweet.

Tweet: (assuming that Tuesdays were/are horrible days to work in a bookstore)

Follow up to the previous tweet. Would consider myself a fan of the two-parter tweets. Like, imagine if you just RT’d this one, how insane you would look. Rec’d no RTs or favs. None.

Tweet: everyone’s raving about ScarJo’s performance in ‘her’ but i just didn’t see it

Seemed like the ultimate dad joke since you literally never see SJ in the movie. If you were around me when I said it aloud, I would sustain uncomfortable eye-contact and drawl out a slow ‘ehh?’ Saw the movie the night before and liked it all right, but it felt very innocuous, like it offered no intellectual challenge or even that much of a conflict. Ambitious for sure—one of Spike Jonze’s strengths is the ability turn high-concepts into entertainment—but I got a little bored through the middle part with the but what is consciousness/realness?? hammer they kept gently tapping you over the head with. Seemed kind of like the epitome of #emorevival. However, there is a sex-surrogate scene that is perhaps the weirdest thing that I’ve seen in movies in a while. Can’t imagine trying to write it.

Tweet: For the record, there are ppl in San Diego who dont like football (even if no 1 knows where they r right now and what’s this strange meat?)

This was the day the San Diego Chargers were playing the Denver Broncos and lost. Everyone I saw today was wearing a Chargers shirt, even a homeless guy. Thought of a post-apocalyptic scenario where people in San Diego would be forced ‘bolt-up’ or be turned into meat. Also slightly bums me out when people refer to themselves as part of the team (i.e. we lost today). You’re not on the team. Oh wait, you have the shirt on, so maybe you are. What do I know. Rec’d no RTs or favs all day. Golden Globes were also on today. Didn’t read anyone’s tweets about that. ‘Livetweeting’ culture was one of the reasons that prompted me to start this diary, but I’m sure I’ll talk about that later.

Pretty new to the whole brony (male My Little Pony fans) phenomenon, although coworkers told me that it’s nothing new. Am just now realizing that most hentai fans are probably male, thereby negating the joke. Related: ever since this whole cutting back on social media thing started, I’ve been playing a lot more iphone games, specifically Robot Unicorn Attack 2. Anyone else? It’s a fantastic game. There were a bunch of alternate versions of this tweet, mostly related to the game, which seemed too ‘insider baseball’ if you haven’t seen or played the game. Not too happy with this tweet. Rec’d no RTs or favs, as it shouldn’t. Gained one follower though. Moderate happiness. 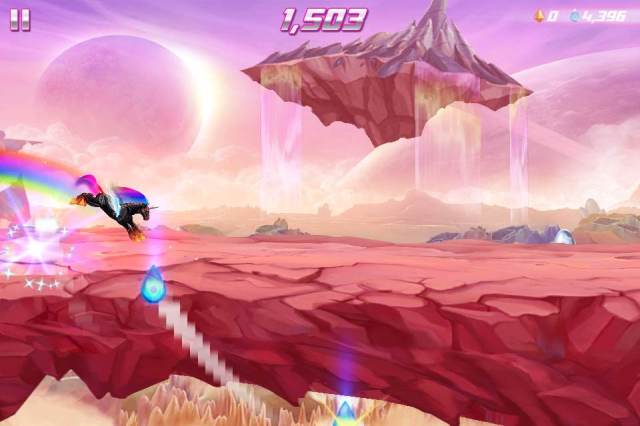 Tweet: working on idea where vinyl guys freak out over the selection at urban outfitters or UO employees in record store wonder where beanies are

Was in Urban Outfitters over the weekend and saw some kid in one of those beanies that looks like your head just took a dump going through the vinyl selection. Hard to imagine anyone shopping there being really into anything, like, at all. Seems that UO caters to people without any real interests. Bought two shirts though. San Diego writer @thisbrokenwheel replied: “Basically I once saw that play out for real in the Amoeba Records in Berkeley.” Ha! Nice.

Today’s moment of restraint came from not posting the NME stream of Against Me!’s new album—their first since the singer came out as transgendered. I remember when she first broke the news that there seemed to be this overwhelming amount of support from the internet, but some of these songs are just fucking heartbreaking and feel very bleak. Get tears in my eyes during the first song, but there are also so many moments of transcendence that make it feel like a victory lap: “There’s a brave new world that’s raging inside of me.” I think this might be the most important album to come out in a long time.

Tweet: just got an email from exxonmobile asking if i want to unsubscribe from their email list. what should I do? opening the floor for discussion

This was goof on Mellow Pages Library’s whole drama. Long story short: Brooklyn indie library who provides a lot of indie publications and zines came out with this story about how exxonmobile offered to fund them for a year, but they were hesitant to take the money—moral dilemmas and whatnot—and asked fans/members their opinions on whether to take the money. Story got covered on the Awl and Fanzine. Turned out, they never got the offer in the first place, and this was some last ditch effort to raise money? awareness? Whatever. It was dumb. Feel like I would’ve respected if they had just owned up to it as a prank and been like ‘got you’ instead of trying to pass it off as performance art or some shit like that. Seems typical of writers to intellectualize everything. But yeah, still think Mellow Pages provides a cool service, but cool people can still do dumb things. We don’t have to like everything everyone does. Rec’d no RTs or favs.

Tweet: funny how ‘bun in the oven’ could be used as euphemism for the birth or death of your child

Rec’d no RTs or favs. Didn’t really matter. I was pissed off this day from reading too much into some emails. Felt good to tweet some gross things though—probably similar to how a serial killer must feel when he/she tweets a really good joke that gets a lot of favs.

Facebook: Posted a video about how facebook sucks. Felt really smug to my current shunning of fbook, but then I returned to Facebook multiple times to see who had shared from my original link (3 people). Feel like this was a step backward.

Today’s moment of restraint came from wanting to post this Grantland article about Against Me! Seriously: this album.

Self-promotional tweet. Although I didn’t notice the typo (“tastine”) until hours after I posted it. This is funny because my boss/editor @drolland RT’d it because, you know, it’s a good article and sends people to CityBeat, but I’m sure it killed him to RT a typo. Sorry Dave. Also RT’d by @amybkrone and fav’d by @ModernTimesBeer, cuz like, if they didn’t, I guess we’d be enemies…?

Tweet: If san diego keeps it at this temperature, this weekend is gonna be Martin Luther King JRts weekend (jorts)

My legs, free at last. Fav’d by @jeffhammett, who I consider my bro in jorts humor, and @lwboyack, who’s been one of my best friends forever, and she’ll give me pity favs every now and then. I don’t need your pity favs, Lauren (yes I do).

Facebook: Shared the the Amy Krone story there too. Selfishly going to tweet/fbook anything that I’ve directly had a hand in creating, and feel that should go without saying. I wonder how this is going to affect the birthday wishes I get on my facebook wall once the time comes

Every time I say ‘wife’ on this thin or in real life, in any situation, I want to attribute it to put quotes around it and attribute it to Borat. Think Borat jokes could be funny again. Also, feel tweets like this say lots more about my taste than ‘my wife’’s. No RT or favs, but my other boss @citybeatkelly replied ‘Married life sux’ and SD’s premier news reporter @jemersmith replied ‘Was it the Deer Hunter?’—both responses made me lol. @jeffhammett also said ‘shoulda included the Bill Pullman clause in your prenup.’ Sorry Jeff: I used up that space for the Bill Paxton clause. By far the most twitter interaction I had all week with this. Lots of people feel strongly about spaceballs and/or deer.

Tweet pic: I seem to have found myself at a falling in reverse show 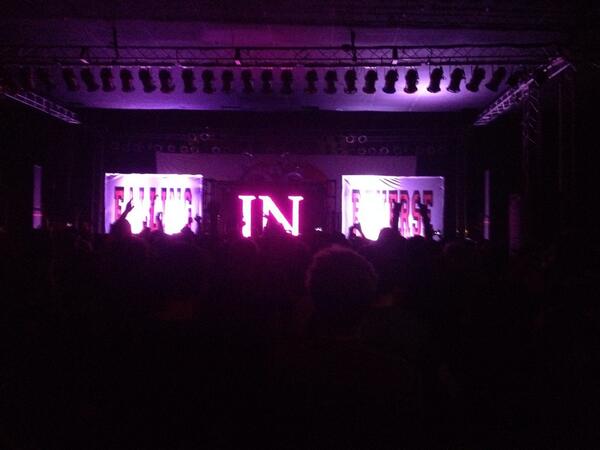 Went to a Falling in Reverse show to see my friend Ryan Seaman drum for them. Was nearly twice the age of everyone there. Place smelled like sour, goth hormones. But it was great seeing Seaman. We were in a HS called The Flare who recorded for and appeared in a made-for-TV Disney movie called The Poof Point, which I’ve been trying to find on DVD for years. Last night, he was playing on this like 15-ft riser with double bass drums and all I could think was damn. Felt so proud of him—it’s been about 10 years since we’ve seen each other. He was a fantastic drummer back in HS, but he’s just gotten so much better.

This is The Flare album that Disney paid for: 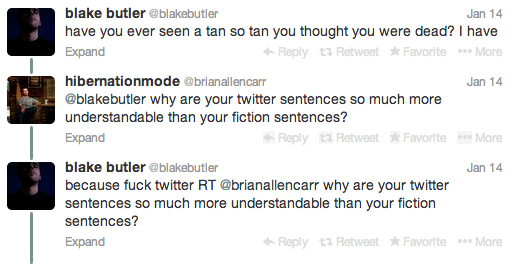