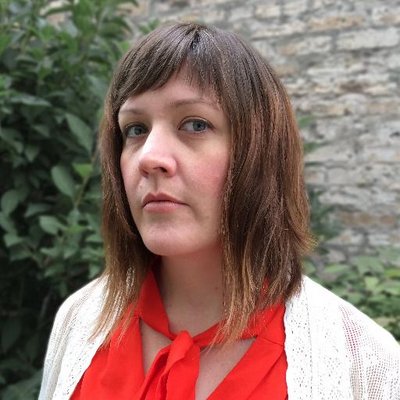 Lindsay Hunter is a writer whom I’ve admired for as long as I’ve taken writing seriously. I saw her read in San Diego, maybe back in 2010—before I had any idea that authors could exist outside the EW book section—and she basically shouted the entirety of her story “Candles” (I think), a story that appears in her fantastic collection Don’t Kiss Me. I remember thinking, not just of her delivery, but of her writing: Can writers do that? Is that allowed? Everything about her stuff seemed so fearless in a way that I’d never experienced before.

Hunter’s writing is also dark. I don’t think I’ve read a post-apocalyptic story quite as bleak as “After,” another story that appears in Don’t Kiss Me. I’ve also had the pleasure of reading an advanced copy of her novel Ugly Girls (which comes out on November 15) and it was the first time I’ve ever taken a picture of text with my phone so I could remember it. It’s veiny, pulsing book, a reminder that the heart is the ugliest organ. Few books feel this alive. So you should preorder it.

LH: 1. The single knock on the door in The Strangers. Liv Tyler is alone in a cabin in the middle of the woods. Not somewhere you’d expect to hear a sudden knock at the door. And–I’ve thought about this a lot–the fact that it’s a single knock, each time. Not the usual rap-rap. It gives the knock (and the knock-er) the feel of something inhuman, something outside any sort of norms we’re used to seeing. All bets are off. There is no urgency in the knock, either. It’s confident it is getting the attention it needs, and it is confident in its utter power over its prey. That single knock lets you know there will be no mercy, there will be no escape.

2. When, in The Exorcist, Reagan suddenly appears at her mother’s raucous dinner party, announces, “They’re all gonna die up there,” and then pees on the floor. The “they” is never identified satisfactorily. And up where? And is the urine Reagan’s body’s loss of control, her giving of power over to the demon, the absolute soprano note of fear in her? Or is it the demon wanting to horrify, to disgust, Reagan’s mother and her guests? It is inscrutable and never explained.