Horror Business is a novel I that wrote. Horror movies play a huge role in the narrative.

Craig Oliver has been my go-to person when I need to talk horror. He’s one of the smartest dudes I know when it comes to the technical/historical/contextual significance of movies, but his mutual love of all things dark—and that recognition of what it says about us—provides a base for our close friendship.

For evidence of this darkness, look no farther than his record label, Volar Records. Volar, in my opinion, puts out the best, weirdest music in San Diego, but there is a biting edge to any Volar band. They feel like they’re creeping up on you. They feel dangerous. Weirdo music for weirdo people, and there isn’t enough of that anymore.

(Also, a couple years ago, I went with Craig to SXSW where he was running a bunch of Volar showcases, and we spent a significant amount of the 22-hour drive talking about highway ghosts and aliens.)

I can tell you about nightmares as a kid. About being scared of the covers of horror movies at the video store. About indulging myself in those same movies as a young teen. About sleeplessness and a general fear of the dark that lasted well into my twenties. The need for music or for the TV to be on, some sign of life in the quiet of night. I can tell you about all the things I’ve read over the years about the function of horror movies as a means to confront certain fears and come out victorious. About the cycle of watching these movies for twenty-plus years on end, intentionally unsettling any sort of peace I’ve had without them, of the battle throughout that same period of time with insomnia, only to indulge myself further.

Most of all, I can tell you about a small handful of those movies looking back at me.

It’s 2005. you’re at Landmark’s Ken Cinema, our town’s only single-screen theater. You’re here with your girlfriend at the time watching Ju-On: The Grudge, the original Japanese version, the third part in the series that was adapted pretty poorly in the US, and with Ringu (adapted rather well in the US as The Ring), helping to popularize the trope of the black-eyed ghost-child.

In Ju-On, a family has moved into a house and has become terrorized by two vengeful spirits. A character crawls backwards as one of these black-eyed ghost-boys approaches. The slow dread of certain death goes against the normal American counterpart of the maniacal running and screaming from some hulking danger. Here, there is no use trying to escape. Your fate is inevitable. As the ghost child approaches, the screen goes black, leaving you in the theater in complete darkness. Slowly a faint light fills the screen, and your hands are over your face. You are shivering, and your then-girlfriend is next to you chiding you for all of this. Slowly, ever slowly, a pair of eyes thirty feet high, looking directly at you. In the past you worried about waking up to these eyes, you’ve worried about them staring at you from within the darkness of the closet.

A year or so later, you and your best friend spend Friday nights watching horror flicks, mostly 70s exploitation and cheeseball 80s gorefests. Eventually you run out, and you start watching more serious fare, sometimes foreign. Tonight it’s the French classic Eyes Without a Face, a weirdly poetic-yet-absurd story of a plastic surgeon father who kills women to steal their faces in an attempt to replace the disfigured face of his daughter, Christine, who stays at home, a prisoner behind a blank white mask. Partway through the film, she’s a little ways off in a room, without her mask, out of focus. The camera slowly moves in, the focus sharpening. So much dreadful weight is placed on the horror of her real face, staring into the camera, staring at us, and before it is fully revealed, you both shut off the movie and quickly head out for a party. A week later, you’re both back on the couch, cueing the movie back up to just before that moment.

“She’s been staring at me all week,” you both agree.

You are seventeen and finally watching The Exorcist for the first time. You’ve tried doing so at night, which proved to be too much, so now it’s day, sunlight pouring through the windows. The first twenty minutes or so, the movie is well done, claustrophobic. You are not religious, so all the ‘God and the Devil’ doesn’t really hit you, but demons in the dark still nag at you nonetheless. And now the main character, the priest, is dreaming, his mother far off, coming out of a subway, unable to hear his cries. And then a flash, a face:

The rest of the film keeps going with its tale of demonic possession and faith, but it’s the split-second image of that visage, staring back, not just from the dark but another dimension, that stays in your bones. The face never goes away. 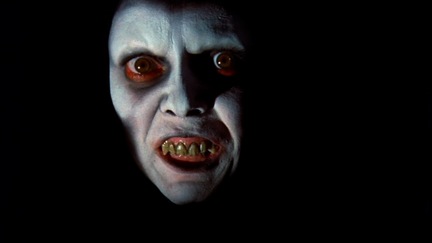 That notion of breaking the fourth wall—first addressed in eighteenth-century stage plays and carrying over to movies and film—the metafictional acknowledgement of the audience—is generally used in both comedic works to jokingly clue the audience in to some elevated understanding of the circumstances within, to make them feel as if they’re in on it; in dramatic works, it’s used for empathetic effect: feel what I feel, we are together in this. In the occasion that it’s used in horror films, the effect is something quite different:

YOU ARE NOT SAFE.

And the first time you are aware of this is the silliest in retrospect. It’s 1984. MTV is relatively new, and your parents are young and watch it quite a bit. You are in a small, unsettling house on the outskirts of Yuma, AZ. You are four years old and easily scared. There is a big premiere of a music video, Michael Jackson’s “Thriller,” and your parents are excited. The video plays, Michael Jackson and his girlfriend stopped in the woods. Michael turns, violently, into a werewolf and chases her through the woods. You are frightened and try leaving the room, but it’s difficult not looking back, MJ as werewolf looking directly into the screen, and then, safety. It’s a movie, it’s not real. MJ and his girlfriend leave the theater, he dances around, and then they are surrounded by zombies; the nightmare isn’t over. MJ turns into one of them, and for a few moments, they all look straight through the television and directly at you.

You try to get further out of the room but you don’t want to be alone, and when you look back, the zombies are all dancing, this has to fun and games, yes? And then it’s over, and MJ is back to normal, everything is safe, but he looks back to you one last time, his eyes yellow, a grin on his face. “There are always monsters underneath,” you’ll always think. 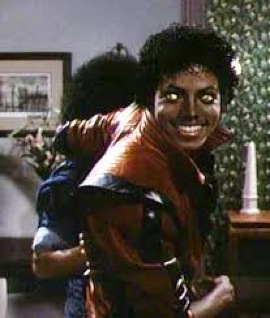