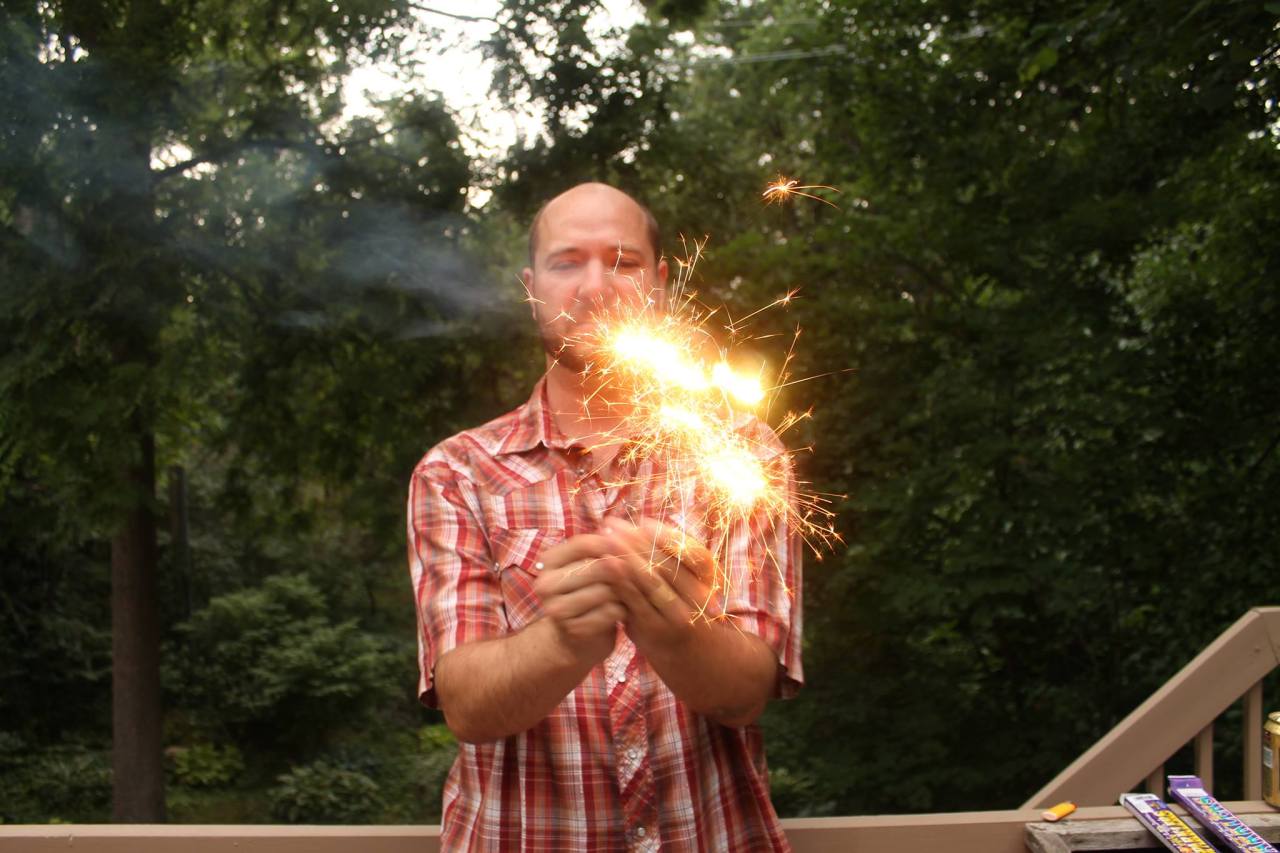 Aaron Burch is one of my biggest influences.  I remember a couple years ago, I was reading stuff like McSweeneys and Miranda July and thinking that those were the pinnacle of subversive, underground lit. Then I got a copy of Hobart 13—the journal that he founded/edits—and it completely opened my eyes to what people were producing: it was dark, funny, real, and troubling in ways that I hadn’t ever read before.<

This year, Queen’s Ferry Press put out Burch’s extraordinary story collection Backswing.  Just like the spirit of Hobart, the stories feel unleashed, like pumped full of feral blood, that veers wildly without feeling disconnected. Only a talent like Burch could create something as touching as “Scout” and as unsettling as “The Apartment” or “Night Terrors.” Also, he may be the only person who could ever write a nostalgic body horror story, “Unzipped.” It really is the best story collection to come out this year.

AB: Last week, Ryan linked to Juliet’s “Horror Business” and said part of what he liked about her selection was that “it’s not from a typical ‘horror’ movie. Having been a kid who was scared of a lot of non-scary stuff, I relate to a lot of nonsensical fears.”

I thought about the question, What scene from a movie has scared/troubled/shaken you the most?, and nonsensical fears and being scared of non-scary stuff and being a kid—and one scene jumped immediately to mind. The one scene that always stands out as having scared me the most. It’s more traditionally “horror” but maybe less traditionally a “movie”?

I wasn’t allowed to watch scary movies when I was growing up; I think I still might not have ever seen a Friday the 13th or Nightmare on Elm Street. There was no precedence, I had no preparation.

“Thriller” was released in December, 1983, but the first time I saw it, the moment of my memory, must have been 1987 or ’88. I would have been 9 or 10. I know this because I remember the music video upsetting and disturbing me so much that, as a family, we had to watch something more lighthearted to settle me down, to allow me to let go of my fear and at some point be able to go to sleep. I remember said lighthearted distraction was one of those “flip-flop”/“trading places” movies, though whether those trading places were Judge Reinhold and Fred Savage, or George Burns and Charlie Schlatter, or Dudley Moore and Kirk Cameron, I can’t recall. (The late 80s loved this plot scenario, apparently.)

Thing was, it wasn’t even the music video itself that I found scary. In fact, I kind of loved the theatrics of it all—the Vincent Price narration, the fact that it was a music video but had a narrative, the choreography, the song itself. That’s what got me in trouble a few times—I’d see it on MTV and think maybe the moment, early in the video had passed, that I’d missed it, that I was in the clear…and then Jackson’s eyes would turn into werewolf eyes and I’d lose it.

I was too young to have ever heard the phrase “the eyes are the windows into the soul,” but I had some subconscious knowledge of their power. I knew eye contact was important for most effectively expressing yourself—for holding someone’s attention, for telling the truth, for letting people know you were listening. And so maybe it was thus that Michael Jackson’s eyes so scared me. He, right before my own eyes, had literally turned evil, his eyes into the eyes of a monster. If he could, might anyone be able to?

I’ve been working on this anthology—Black Candies: See Through—for the better half of 2013. Really proud of it. Feels like a lot of blood has gone into it.

It’s weird because, even though I don’t have any writing in this one, it feels very personal. I will call myself a horror fan, but I find the “horror” tag pretty reductive in general. When people think of “horror” they think genre, blood and guts, vampires, monsters, whatever. The stories in “See Through” represent my favorite kind of writing—haunting, funny, weird, dark, lyrical. One of my favorite things about editing these books is soliciting writers who aren’t necessarily known for dark writing and letting them loose. We all have it in us, and those that can indulge in “genre” (even though that’s not really as defined or stigmatized anymore) are my kind of people.

Also, this year marks a turn in Black Candies that I’m particularly proud of: we have more women writers than men. As I’ve said before, I don’t want that to a point of diplomacy or a shallow attempt at political correctness, but more of a correction to my personal reading habits. I would love for Black Candies to correct the trajectory of male-dominated lit journals, and that we’re a horror anthology—a genre where women are notoriously underrepresented—that’s incredibly exciting. I have to give a big shout-out to Roxane Gay, who helped me get some really great women writers, writers that I can now count among my favorites.

Finally, I would love to give a shout out to Justin Hudnall and So Say We All, the literary organization here in San Diego that I’ve been involved with for the past three years. I’m proud of what organizations like ours do for the quality and demographic inclusiveness of our art in contrast to profit-minded publishers. And with these Black Candies books, Justin provides unquestioning support. Not everyone can publish books without having to resort to Kickstarter or Indiegogo (which is not meant as a dig at crowd-funding or anyone who uses it—I just feel they create a lot of extra work)—I feel lucky to have the circumstances where we can create and produce without having to rely on too much outside assistance. Thank you, Justin.

Other thanks: all the writers and artists who donated their work. It’s always difficult to ask for writing without offering pay, and I completely understand those who didn’t submit stories due to that fact. But those who did: you’re making my dreams come true.

Thank you Jay Wertzler: my writing partner and co-editor. I’ve never worked so well with anyone before. If you don’t have someone who will read your stuff and provide as much quality feedback as Jay, I’m sorry.

And of course, Adam Vieyra. He creates and designs beautiful books. I would be stuck in zine land, probably still using Chiller font, if it wasn’t for him. He did the majority of “See Through” in one day—I was there. Watching him work is like watching a beautiful time-lapse. 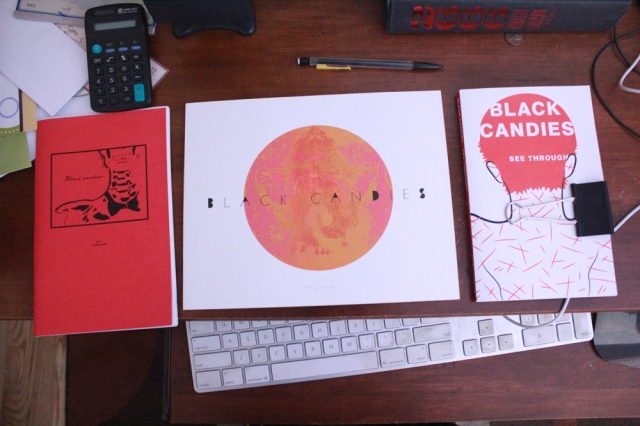 Anyway, enough of the sentimental stuff. I hope you enjoy it!

And please add on Goodreads.

Hobart is a midwestern literary journal that boasts some of the more-visceral writing I’ve seen (not to mention a solid design)  Since this issue is their 13th, all the stories have to do with luck (or lack thereof). During the course of reading it, I decided to take note of all the lucky stuff that happened in my life.

Two things: Besides the whimsical indulgence of romanticizing coincidence, I’m not sure if I believe in luck. I don’t think there are exterior forces that congregate around some people and leave others alone.

Also, I’m not a fast reader. So there I had a lot more opportunities to have “lucky”

experiences than someone who can read faster. I don’t know if this in itself is luck.

Finally, anyone remember the X-Men characters Longshot and Domino? Both of them had “Luck” listed under their mutant powers. But doesn’t that negate the definition of luck? (The chance happening of fortunate or adverse events; fortune 2. Good fortune or prosperity; success: 3. One’s personal fate or lot). It seems that people who ‘make their own luck’ are really just cheaters.

Lucky thing 1: I consider my acquisition of Hobart 13 as somewhat lucky:

If it hadn’t been for Amelia Gray’s emoticon’d link share, or the fact that I had been on Facebook right then, I would not have known about the insane Hobart giveaway.

Jac Jamc begins Hobart 13 with a series of earnest essays about how she defines luck. They’re all very good, but there’s a bit that really stuck with me. Pretty much defined what I thought of luck:

She has a book that is out today. You should probably go read it.

Lucky thing 2: had two pretty decent job interviews. None of them were for jobs I was particularly excited about, but I consider myself a pretty terrible interviewee. Any opportunity to leave an interview without picking apart each line you said with disdain is a victory. Even if you didn’t get the job.

Rolf Potts has a long essay in which he uses David Shield’s Reality Hunger, a text of remixed texts, as a springboard to remix his own account of being drugged and mugged in Turkey. I didn’t like it at first because I thought it was somewhat condescending to utilize someone’s method of delivery to show its flaws. Like oh… how meta of you. But when it became clear that he was using it to deconstruct his own narrative and highlight our basic love of story (I think), then I really liked it. Plus, there’s really good page formatting here.

Lucky thing 3: My mailman memoirs were printed on the cover of the SD Reader. Not really lucky because I had received payment and knew they were going to print it, but the day that it came out, I was at a birthday dinner for a local journalist and met a lot of other freelance contacts who were impressed with my work.

My absolute favorite piece was Tod Goldberg’s When They Let Them Bleed” which was about his love lightweight boxing champion, Duk Koo Kim, and the death that befell Kim in the ring. He relates that to his own adolescent body issues and the self-mutilation he endured. Really powerful stuff without falling into melodrama.